Germany 3 Dolls Hauptmann von Köpenick
Three character dolls from East Germany. The boy carrying a pair of boots over his shoulder is a figure from an advertisement. He is a Berliner Schusterjunge or cobbler boy from Berlin. The man in the blue uniform depicts the 'Hauptmann von Köpenick', the Captain of Köpenick. You can find more info about him here. The lady holding flowers remains unidentified. They were made in East Germany (DDR) during the 1950's or 1960's. Great pieces of 'Ostalgie' as the Germans say. They have stuffed cloth wire framed bodies ans stockinette faces. There is some moth damage; the blue coat of  the captain has holes at the back and the boy misses most of his right ear. The lady is fine. 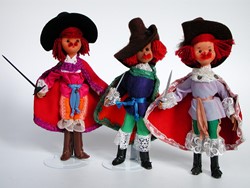 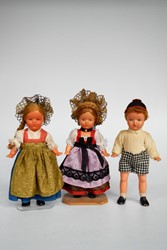 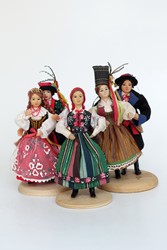 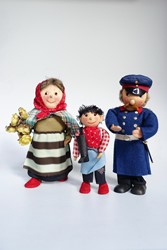